“Mickey’s story starts with a rabbit.

Disney Brothers Studio was just another cog in Universal Pictures’ animation machine when, in 1927, Walt Disney created a character called Oswald the Lucky Rabbit. With his round, white face, big button nose and floppy black ears, the smiling Oswald was an instant hit and Universal ordered a series of shorts. When Disney met with executives to negotiate another contract in 1928, the rabbit was still riding high and the animator thought he had the upper hand. Instead, the studio told him that it had hired away all of his employees and retained the rights to Oswald. Univesral offered to keep Disney if he took a lower salary, but he refused. He and Ub Iwerks — the one loyal animator who stayed with Disney Bros. — returned to work and held a series of hair-pulling, late-night brainstorming sessions for Oswald’s replacement. They shortened the ears, added some extra padding around the middle, and turned the rabbit into a mouse. Named Mortimer. The moniker didn’t last; there are a number of tales attempting to explain how and why — the most popular being that Disney’s wife hated the name and suggested its replacement — but soon he was ready for his debut as Mickey.

The first two Mickey shorts drew no attention, but then came Steamboat Willie, the first animation to feature synchronized music and sound effects, hit the screen. The film premiered in New York on Nov. 18, 1928 and was an instant hit. A series of Mickey Mouse shorts appeared within a matter of months — including Plane Crazy, a short that predated Steamboat Willie in which Mickey plays a rodent Charles Lindbergh. The mouse was a national fad by the end of the year, and it wasn’t long before the real genius of Walt Disney kicked in: marketing. Walt quickly started up a line of Mickey merchandise, and within two years the Mickey Mouse Club, a fan club for children, was up and running. 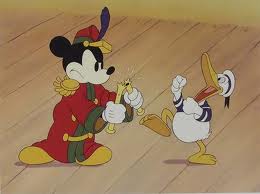 In 1935, a young animator named Fred Moore gave Mickey his first makeover. Earlier animators had drawn the mouse as a series of circles, which limited his movement. Moore — who later animated Fantasia’s Sorcerer’s Apprentice segment — gave him a pear-shaped body, pupils, white gloves and a shortened nose, to make him cuter. Mickey also appeared in color for the first time that year; The Band Concert’s use of Technicolor was so innovative that critics still consider it to be a masterpiece. (Click here for a list of the All-TIME 100 Movies)

By 1937, Disney Studios was producing about 12 Mickey shorts a year, with Disney himself providing the mouse’s high-pitched voice. Mickey became a football hero, a hunter, a tailor, and a symphony conductor. He accidentally sprayed himself with insecticide, rescued Pluto from the dogcatcher, crashed a car into a barn, fell behind on his rent, enlisted in the army, had his house repossessed, and lost Minnie to an innumerable string of muscular bad boys (although he always won her back in the end). The cartoons’ vaudevillian overtones made liberal use of slapstick and puns, and Mickey’s close association with children required that he always remain upstanding and moral (leaving the cantankerous Donald Duck to get into all the trouble). 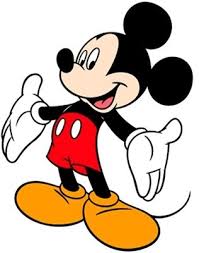 By the 1950s, Mickey had theme park, a newspaper comic strip, and The Mickey Mouse Club, the hit television variety show that has launched the careers of teen stars from Annette Funicello to Justin Timberlake. But soon Disney feature films like Bambi and Sleeping Beauty began to rake in the accolades — and box office receipts — the mouse faded into the background. Between his last 1953 cartoon short, The Simple Things, and the 1983 Christmas special Mickey’s Christmas Carol, the mouse that built the house of Disney would remain out of work for 30 years.

Yet despite Mickey’s semi-retirement, his ears are still one of the most famous cultural icons of the 20th and 21st centuries. He has posed for photographs with every U.S. President since Harry Truman, save one (Lyndon Johnson never visited a Disney theme park). Disney claims that Mickey had a 98% awareness rate among children between ages 3-11 worldwide. Mouse-related merchandise sales have declined from their 1997 high, but they still make up about 40% of the company’s consumer products revenue. Mickey returned to the big screen for a cameo in 1988’s Who Framed Roger Rabbit. Warner Brothers’ Bugs Bunny was also in the film and the two companies demanded that each character receive the same amount of screen time, down to the very last second. A semi-secret 2001 image revamp put Mickey’s logo in trendy places: on celebrities, in a Sex and the City episode — he was printed on a t-shirt and stretched across Sarah Jessica Parker’s chest — as well as in high-end boutiques. In 2002, he appeared in the PlayStation2 video game Kingdom Hearts. And in 2006, he became 3-D for the very first time. Now you can see him on Mickey Mouse Clubhouse, an early morning Disney Channel show designed for children ages 2-6. Or you can book a flight to Disney World and shake his oversized glove yourself.”